A cross between the floppy-eared Beagle and the stout Bulldog, Beabulls are a friendly, playful, and affectionate mix that shares the qualities of two popular breeds, making it an excellent addition to families of any size due to their calm demeanor and loyalty. Keep reading to find out more about Beabulls.

Beabulls originated in the United States, although it is difficult to determine the exact time frame that the first mix appeared. As time goes on, they are becoming a more popular breed in the States.

While the history of the Beabull is unclear, the origins of the Beagle, the Beabull’s first parent breed, can be traced back to medieval times. Beagles were used primarily for hunting and tracking down prey. The Beabull’s other parent breed, the Bulldog, was unfortunately used in a violent early 19th century English “sport” called bull-baiting. Today, they are docile, friendly, and loving. 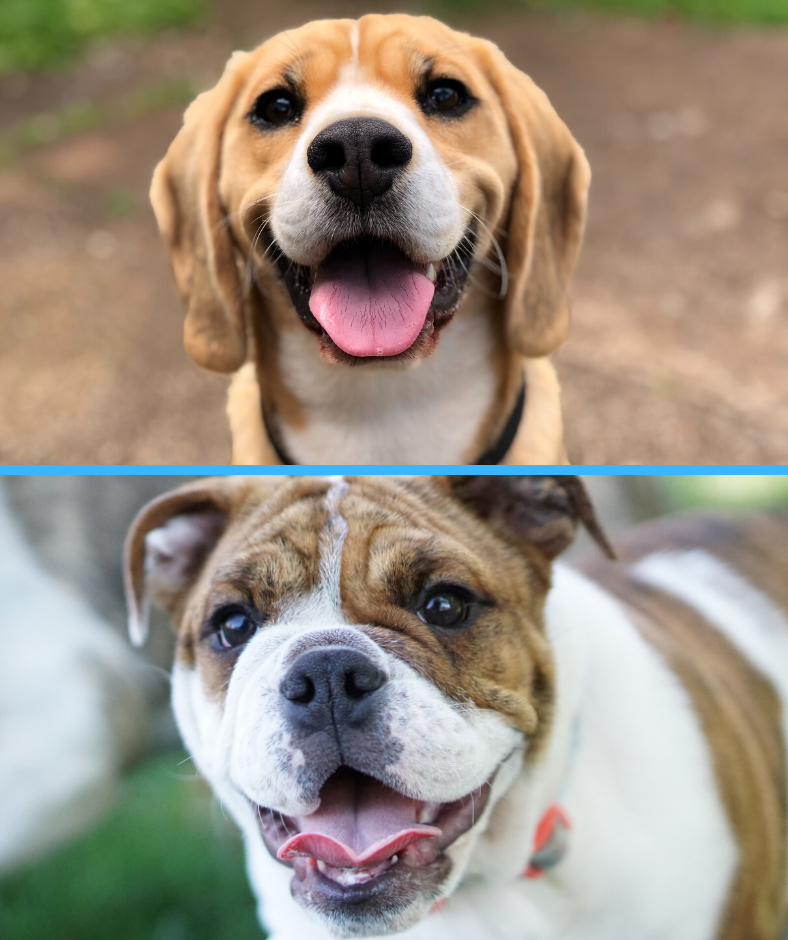 The appearance of a Beabull is unpredictable; some share the physical features of a Beagle, while others have the small, full frame of a Bulldog. Regardless of which breed the mix favors, all Beabulls don the floppy ears of a Beagle and the short legs that are characteristic of both Beagles and Bulldogs.

Beabulls’ coats tend to be relatively short, straight, and fairly thick. In terms of color, this mix can be white, brown, or even a brindle coat pattern, which is black or dark brown stripes on a lighter colored base.

A healthy weight for a Beabull is between 30 and 40 pounds, and they have an average height of 12-16 inches.

Like many dogs, Beabulls can be susceptible to Hip Dysplasia – a skeletal disease in which the hip joints don’t develop properly. This makes walking, climbing stairs, or playing laborious activities.

Beabulls are also prone to ear infections due to their long and droopy ears. Dogs with ear infections tend to bat at their ear and whine due to the pain. A discharge coming from the ear as well as debris-filled ear canals are strong indicators of an ear infection.

Beabulls are also susceptible to Hypothyroidism, which is defined by a low functioning thyroid and can be identified by weight gain, decreased activity, increased shedding, and hair loss.

While not all Beabulls will develop health conditions and should remain healthy given the proper attention and care, it is important to be aware of the physical symptoms of these health issues so that you can get your Beabull the proper care before symptoms worsen. 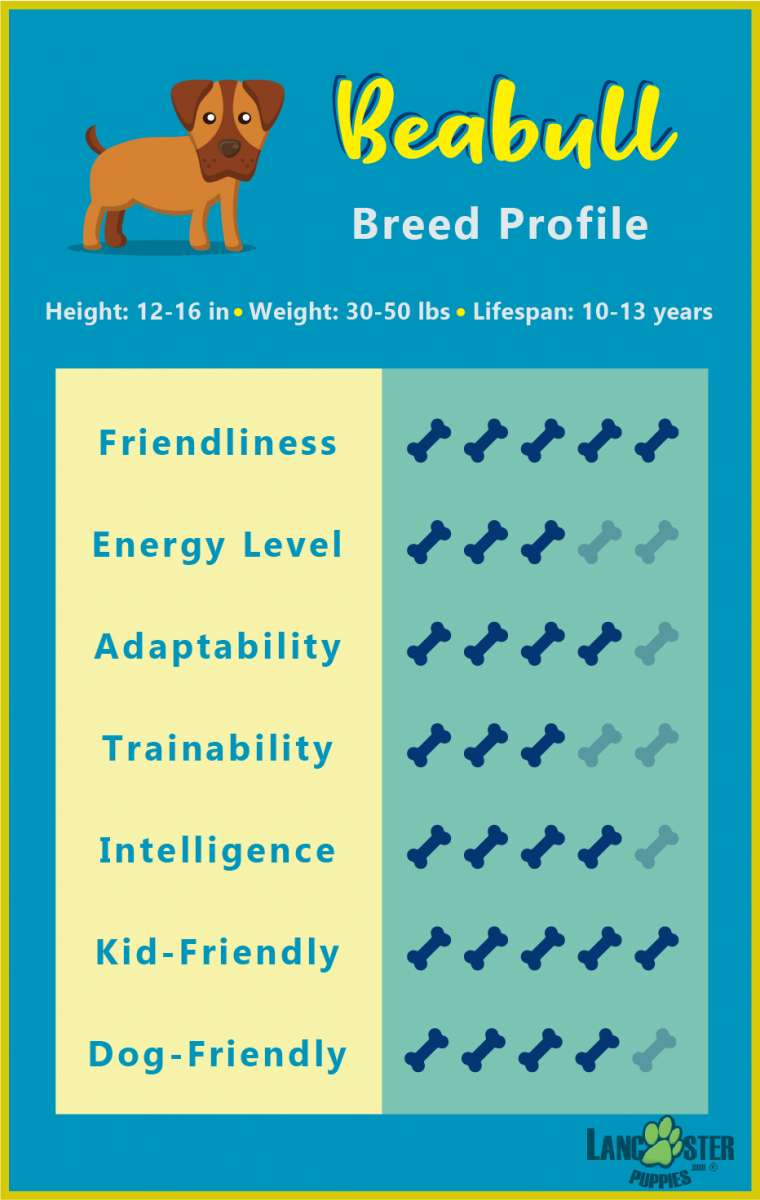 Beabulls are docile and get along great with just about all people. They are not easily bothered by rambunctious children, making them a great addition to families with younger kids. Beabulls are not shy of strangers either, but will always prefer their owners and crave their attention more than anyone else’s.

While not overly active, Beabulls enjoy their fair share of playing and should receive about an hour of playtime a day.

For the most part, Beabulls are easy to train. They respond best to treats and other reward-based training and need to be involved in engaging activities. It is possible that the stubbornness of the Bulldog can come out and make training a bit difficult. However, as long as you remain firm and reward good behavior, training should be a breeze, and your Beabull will be a proper and loving companion.

As puppies, play-biting is something to look out for and important to correct before it turns into a habit. Best practices for curbing your Beabull’s playful yet strong bite include introducing toys for them to chew on so they learn appropriate objects for biting.

The Beabull’s coat sheds frequently, and it is recommended that grooming is done daily with a pin brush. It is also crucial that their ears are cleaned weekly, so as to prevent any build up of debris.

Beabulls should be bathed at least once a month, or anytime that they’re dirty.

Over all, Beabulls are a charming mix that will love you and your family, no matter the size. If you are interested in adopting a Beabull of your own, you can find one on Lancaster Puppies today!

Do Welsh Corgi Have Anxiety or Depression?

Dogs and Their Owners’ Stories

The Evolution of Dogs: From Wolf to Man’s Best Friend

A Guide to Non-Shedding Dogs